As I sit here on the last day of the winter NAMM 2012 show trying to make sure I have all the information I need to write the wrap-up, I have had 3 trips back in to confirm stuff, It is all such a blur. So many people, so many products, they start to blend over time.

I am so happy I had Colin and Nick with me on this trip. Colin took 99.999% of the pictures that I have posted (About  1000 shots), while Nick seemed to know every uke person out there and was key in getting some of the vendors warmed up so I could talk to with them. Also Nick and Colin are awesome uke players, so that was an added bonus to have them around to play the ukes and made wondering the halls a ton more fun.

Colin rocking out at Kamoa

I truly credit my current surge in visitors (60,000 in the past 3 days) to them being around and helping me get all the ukes and other fun stuff out to you.  On our first day we walked a little over 11 miles, and day after day they were very excited and willing to follow me aimlessly. For their hard work I am eternally grateful. 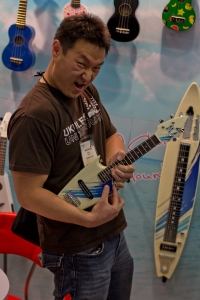 The show was absolutely insane. So many people trying to walk around and get information, make deals, and figure out what they want to do.  Covering the show from the perspective of the ukulele player to some would seem very limiting, but those are not ukulele players.  If I had to say what  the hot instrument of the show was, it would be the ukulele, but I may be a little biased.

I am going to break this down into a few sections: New and exciting,  Weird, and WTF?. I figured that a long drawn out article would get boring. I also have some pics that I am not going to talk about, but put captions on them so you know what is in them.

I would have to say that the biggest story would have to be the Taylor Uke (Story). I was lucky to be able to play it before the show started, and as expected it was really nice. A lot of uke players thought it was nice, but maybe not worth the price tag of $9000 for the uke and guitar.

Kamoa would have to have my top new ukulele for NAMM. The Steel string electric ukes are just out of this world, along with all their other ukes. I was standing outside the hall before they let us in and caught a glimpse for just a second and I knew they were my first stop. It is a tenor hollow body steel string uke and Kamoa does it better than anyone with the multiple bridge configurations and choice of colors. They also came out with a steel string uke bass, it is cool but I am not in love, some of my friends think it is the bee’s knees.

Over in the Gold tone booth they had a small builder called Beard guitars. They had a really cool Reso-Uke that sounded so nice. I happened to be sitting in the press area when the daughter of the guy that made it was sitting at the same table and told me they used a bass baffle to give it a much deeper tone, and I would say it does for sure.

Kiwaya Sopranano (super small uke), honestly I have no idea what to call it be side crazy small. At the Kiwaya booth they had 3 tiny ukes and they all played!! I really like the Hello kitty one. As you can see I look like a giant holding it. It is so small they had to use custom tuners on it. Don’t expect them to come to market any time soon. They range from $1100 – $1600 to make, Still on my list of ukes I would love to have.

From Flea market Music we saw 3 new things. The first being the polycarbonate fretboard on the firefly banjo uke. Not super new, but still… I like it. Another new option for the fire fly is a skin head option. It just gives it a little more punch. Also they just announced that they can do custom laser etched designs on the flea and Flukes. They showed one with a custom sound hole and also some custom flames. I may have to make an Ukeeku.com Fluke someday.

With the popularity of the ukulele it sometimes takes time for technology to catch up. There have been a few ukulele pickups on the market, but for the most part they are just acoustic guitar pickups with the wire wrapped up so it does not get all wrapped up. Now there are a couple pickups made specifically for the Ukulele. Mi-Si has one that is nice and small and can have volume and tone added, it uses L.R.Baggs new element that they use for their ukulele pickup.  Both are pretty cool. Not sure which one is better. The only real difference is that the Mi-Si uses a rechargeable element, while L.R. Baggs uses a small watch battery.

The last really interesting product that I ran into was PegHeds. I love mine on my Boat Paddle uke. He will be offering the tuners with real wood buttons and looking into really pretty hand carved tuner buttons. I hope that more makers would use them since they are so much lighter and I also think they look so classy.

One of the most fun things about the NAMM show would have to be all the “Famous” people that you meet. I stumbled in to the Taylor booth and saw the winner of the voice, Javier Colon, sing a few songs. On the ukulele side I was able to see Aldrine from UkuleleUnderground.com play a few times at the Kanile’a booth, also Rick Turner from Compass Rose was making a ukulele at the show. I also met Mike DaSilva and Tiki King. One of the biggest celebrities that we ran into was Mya walking around with her friends.

One of the things that blew our minds while walking around was the crazy amount of no-name ukes that are available from china. We kept running into so many weirdly named ukes from china. Many of the companies are looking for American distributers. My favorite named one was Strong Wind. For the most part they reminded us of the different ones that we know under different names. I wonder if the slow economy has driven them to try to up their sales or is the community so hot that these companies are trying to cash in on it. I found that a lot of them are just cheap crap-a-leles that you find in department stores and being peddled online as real ukes. 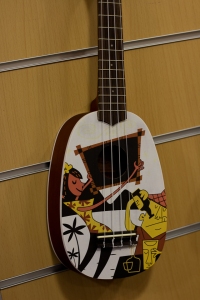 China Uke, ripped off from http://www.derekart.com/

A really fun uke was the Fishuku. The body is shaped like a fish. What I could hear it was OK. Maybe a little expensive, but the novelty of it may be worth the extra money. Hoping to get a review one some time. 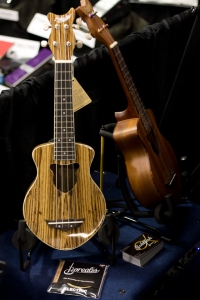 The weirdest uke would have to be the Tuna Uke from Lanikai. The idea is that the nut and bridge are adjustable. Not sure if it is such a good idea. I figure that if you buy a uke it should be right from the get go. They will offer the ukes in both the tuna uke and the regular bridge. Time will tell if it will be something.

A few people have commented on the new Mahalo surf ukes, a set of ukes and a lap steel all with the same surf board look and color scheme. I like the look and the fact that one is a nylon string and the other is a steel string uke. Not sure why they decided to do the lap steel, but hey, maybe a group could buy it and look the part at least. 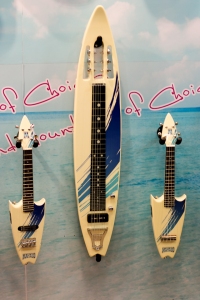 Not that many crazy things that I thought were totally out there at this show. I saw a few ukes that are just toys, and I find that kind of stupid to have at a show with musicians. The other product that I would give the WTF award to would be the iPhone holder that looks like a uke. The neck does not do anything, it is just there for show. You use whatever app you want.

The last thing that made me do a double take would have to be an ad from Eddy finn, it just seems wrong coming from them. They are not that kind of company. By no means would I say they are some wholesome Christian company, nothing wrong with that, they are just a company that sells instruments that people buy as a first ukulele, not some hard core rock shop.

The NAMM show covers a lot of instruments like drums, guitars, violins, kazoos to name a few. We saw a few products that we liked and thought ukulele people would think are cool.

The first new product comes from Blue Mics, it is there new higher end Mic called the Spark Digital. It can be plugged into an iPad (or iPhone) or USB. It has both connectors. It is a step above the Yeti that many of us love and currently use. The stand also has some isolation to help reduce noise when it is on a desk with a humming computer.

Another product that I have been receiving a few e-mails on was the footdrums. Very cool foot  operated drum kit. It has a snare, tambourine, shaker, and a bass drum. You control it all with your feet so you can be a one man band. They also have individual items too, like a tambourine or shakers. Just a really fun idea. 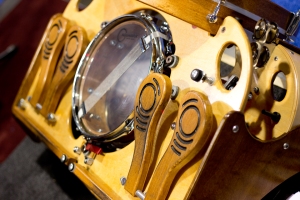 There were many other things that were cool, just not cool enough to stick in my brain after 3 days of walking around

I would have to say that there were a few things that we saw that seemed to keep recurring, the first would have to be that there were a few more steel string ukuleles. Some were good, but mostly they were bad. Kamoa is the only one that I thought got it right. The other thing that we saw where all the Chinese ukes from so many companies that we never heard of. One would not let us take pictures, it looked like an Ohana without a label on the heads stock.

The last thing would have to be the dude that seemed to be everywhere. He played at every booth it seemed like and ended up in a few shots that Colin took, It was just weird. Guy seemed nice, just kind of strange.

If you are looking for more NAMM 2012 coverage Head over to UkuleleUnderground.com’s coverage

Gotoh Stealth tuners on the Taylor

Wait, what? didn’t they stop making these?

Colin rocking out at Kamoa

Mim With her boys

Elton John and me

Colin holding Dasilva fish uke with The Dude in back

Mike DaSilva and his fish uke

China Uke, ripped off from http://www.derekart.com/

Aldrines logo on his signature uke

Carved back of an Akulele

Seeing the world through strumming a ukulele

Ukulele for the heart.

Music self-played is happiness self made.

A place to reflect on ukuleles and ukulele reviews